A very good friend of mine, who has a very close association with Canyonlands National Park, realized, after seeing that I had a CNC Plasma cutter, that we could make a nice gift for the current Park Superintendent, Kate Cannon, who is retiring next week.

My friend suggested that a silhouette of Druid Arch, a difficult to find, but very imposing natural arch, would be appropriate. Fortunately I had a fairly nice and high contrast photo of the arch that I took on a trip in 2005. So…
Here’s the arch: 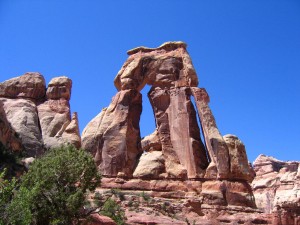 and here is the gift: 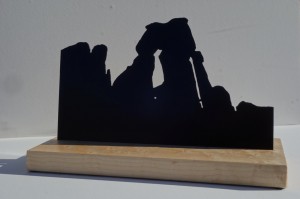 With my brother-in-law celebrating his 50th birthday this year, I couldn’t pass up the opportunity to:
1. Yank his chain a little,
2. Use my new toy!

So, a popular item in plasma cutting ‘circles’ is what’s called an ‘F-Bomb’. Now without going into the derivation of this name, the object is a cutout that looks like a ‘bomb’ that would be dropped from an airplane with a large ‘F’ cut out of the center (for some reason I’m not at liberty to say). For this occasion, however, we can be sure that the ‘F’ stands for ‘Fifty’ and therefore, the following object seems entirely appropriate: 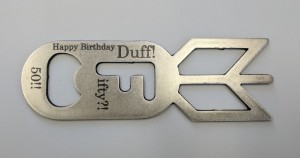 For those who are curious, the ‘bomb’ was cut out of a sheet of 11gauge 304 Stainless Steel and I used my Laser engraver to ‘burn’ the printing onto the surface.

New birthday present to show off! 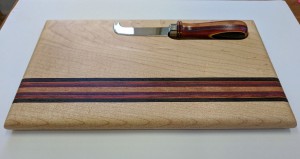 Cheese Board with well for Cheese Knife. 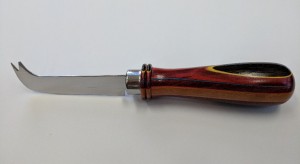 Close up of Knife for Cheese Board.

Well, this past fall I finally got around to adding the cabinets I had planned for the East Wall of my Workshop. The East Wall had become a dumping ground for pretty much anything that didn’t have a ‘home’. As you can see in the photo below, it had really gotten out of hand, but, with the new cabinets and storage, not only was it organized, I discovered that I had room for yet another tool!!!! 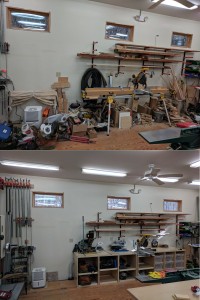 Before and After new cabinets for East Wall of Workshop.

Naturally, an empty space like the area on the left can not go un-filled! So…
Thinking about what’s next on the workshop growth plan, I was ready to start dabbling into metal work. Lots of choices here, but, in the end, I concluded that the first place to start was the ability to cut sheets of metal into something useful. After some investigation, I discovered that a company in California, Langmuir Systems, sold a CNC Plasma Cutter kit for a reasonable price. 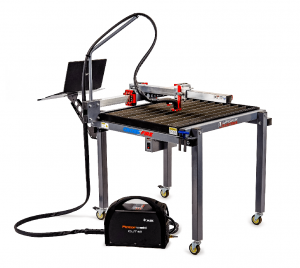 The table size is 23×25 inches and, with a water table, was plausible to use in a woodworking shop. The best part was that, about the time I decided that I’d get it after Christmas, Langmuir had a ‘Black Friday’ sale and I got the table for substantially less than the list price. Of course, by the time I bought all the OTHER stuff you need to make this useful and safe, it will take a long time to recover from this!
In any case, here is the resulting installation: 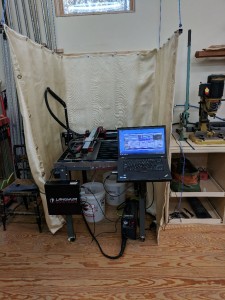 and a closer view: 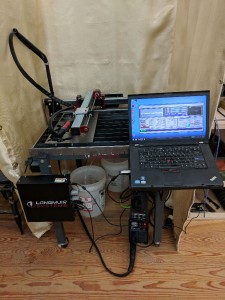 Close up of CNC Plasma setup.

In case you’re wondering, the ‘curtains’ around the plasma cutter are made of fiberglass cloth. They keep the bulk of the sparks thrown off by the cutter contained and also forms a ‘room’ by which a single vent, connected to my dust collection system, can pull out the bulk of fumes produced during the cutting process.

So, now that my new toy, er, tool is in place, here’s the first ‘real’ thing that I cut… 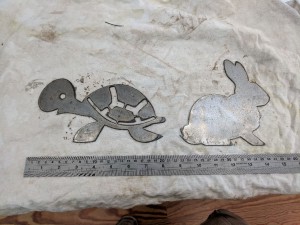 and after a bit of clean up: 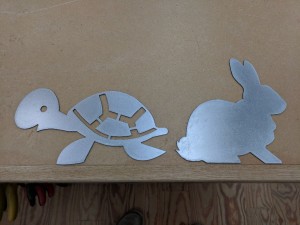 These two have been ‘deployed’ to our yard, the rabbit has been painted white and the turtle has been left to weather naturally, both set out as initial test cases for future yard art. Now it’s time to think about the other projects I can work on…

Won’t spend a lot of time here today, but here’s a sampling of this year’s Christmas presents that I’ve made: 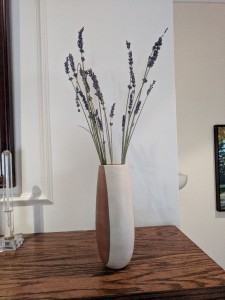 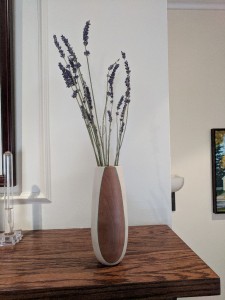 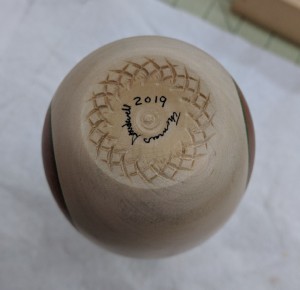 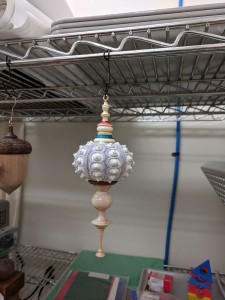 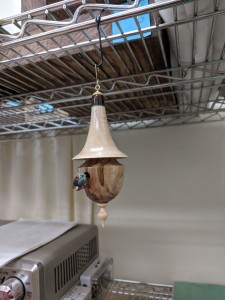 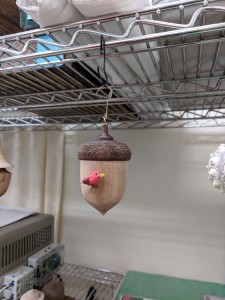 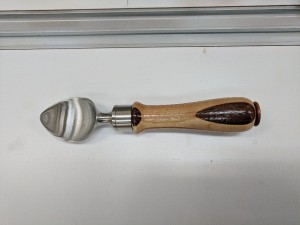 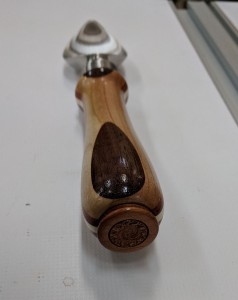 Close up of ‘button’ serendipitously added to the handle. 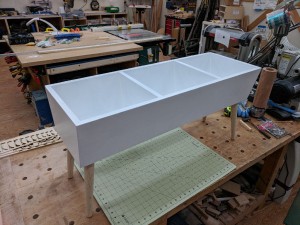 Book Bin to store our Granddaughter’s many books. Just the right height for her to reach in, pick a book, and bring to Grammy or Grandpa to read!

The secret to doing decent woodworking is to learn how to correct your mistakes. In the process of making some of these gifts, I made some doozies! I thought it would be interesting to show what mistakes were made and how they were corrected.

Here is the first one, and it is a doozie! When I was almost finished with the vase, I was shaping the bottom to make a nice stable base for the vase to stand on and, as I drew the tool away to examine the progress, I carelessly let the tool touch the workpiece. In an instant the spinning workpiece caught the tool and slammed it into the tool rest, making a huge dig in the side! 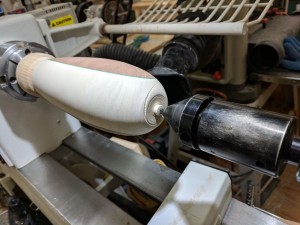 Major WHOOPS here! The nice smooth curve now has a nasty deep dig into it!

This vase was so far along and I had little confidence that I could fix this big gouge without significantly altering the overall curve of the piece. Fortunately, I live near a great resource, the Chapel Hill Woodturner’s Club, and I was able to go to their facility and ask Frank Penta, an extraordinarily talented woodturner, to help me. He was impressed with the vase and barely even noticed the nasty dig, which I thought totally killed the piece! I mounted the piece in the lathe and he showed me how a pro does it! The shavings coming off his tool were so light they literally floated in the air and, in no time, he had shaped the base to follow the curve and fix the piece! THANK YOU FRANK!

Here is the next one, while not as potentially tragic as the vase, it still left me with a case of having to fix a piece that was well on its way to something I liked, but dangerously close to being ruined! 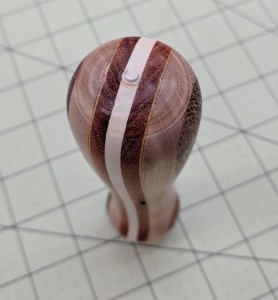 As I was profiling the end of the handle, before removing it from the lathe, I was too heavy handed with the gouge and made the turn around the corner too close to the nicely shaped lamination on the top of the handle. Consequently I didn’t have enough room to try to fix this mess.

So… in this case, I realized without enough material to fix the end I knew I had to add more material! 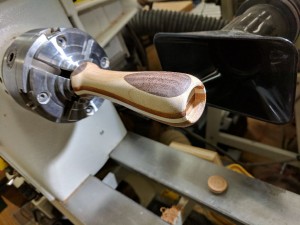 So, rather than trying to turn off a shape, I thought that I could drill out the end of the turning and add more material with a plug that would give me room to shape the end nicely. You can see the nice tear drop shape on the handle that I was trying to preserve. 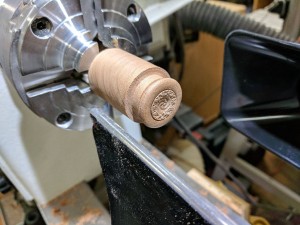 I turned a scrap of Cherry to make a plug to cover the end of the handle. I decided, since I had plenty of scrap, to experiment with adding a design to make it look as an intended added detail.

So, in this case, the ‘fix’ was actually an enhancement to the original design as it added a unique detail that looked interesting and attractive AND covered up the mess up!
WordPress theme: Kippis 1.12