I’ve updated the heating system at the Little House in the Village.  The previous setup cycled too quickly due to the high heat output from the boiler and the low heat consumption of our small house’s radiators.  The boiler needs the high heat output to be able to create hot water on demand and, while the boiler is capable of modulating its heat output over a 5 to 1 range, it wasn’t able to go low enough to heat the house efficiently when there were moderate temperatures outside.

With this new setup, I’ve added a buffer tank in the crawlspace to provide some thermal mass to store heat during heating cycles.  In theory, this should allow the boiler to burn for a longer time and then stay off for a very long time – much more efficient this way.  Unfortunately, as I’ve cited before, “In theory, there is no difference between practice and theory.  In practice, there is.”[1] In this case, the boiler does burn efficiently to get the tank up to temperature, but then reverts to short burns to keep it warm.  Some tweaks are definitely needed…

In any case, here is the current setup.  I really didn’t want any equipment in the crawlspace, but, being a passive tank, the problems should be few – “In theory…” 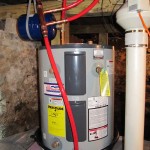 The buffer tank in the Crawlspace. 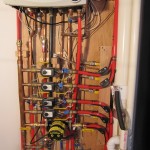 The heating system in the kitchen. It all fits in a 36″ wide cabinet!

[1] “In theory there is no difference between theory and practice. In practice there is.” Variously attributed to Jan la van de Snepscheut, Albert Einstein, and Yogi Berra.