In our kitchen at the House in the Woods, we have one spot that desperately needed a cabinet.  Not only because the space was vacant, but because we really needed a place to store our collection of cookbooks (and another horizontal surface wouldn’t be a bad idea either).

Kerry decided to look for an inexpensive cabinet from Overstock etc. so we could fill the space quickly.  She found a number of candidates, but all of them were too large or wrong shape for the space we had.  Rather than having an off-the-shelf cabinet look clumsy in the space, we agreed that I would make a knock off of the off-the-shelf unit, but re-sized to fit the space.

Here is the original cabinet: 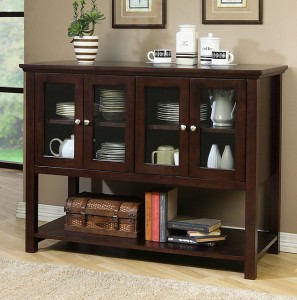 The first change I wanted to make was to replace the glass with something opaque since we didn’t want to keep the cookbooks in a nice neat order required if they were visible.  In this case, solid panel doors would have worked but I thought it might be ‘interesting’ to use the four side by side panels to ‘tell a story’.  At first I thought of panels engraved with Kanji symbols, something I could easily do on the CNC router.   You know, something like Life, Health, Happiness…

However, Kerry thought something that was more a ‘picture’ would be better and, after spending a few days researching, came up with a nice stylized ‘branch’ that could flow from one panel to the next.  I liked it!

Here is the result of the paneled doors: 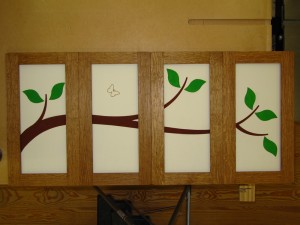 Doors with engraved and painted panels.

Finally, as you can see from the doors above, I decided that, rather than have some nondescript ‘brown wood’, I used quarter sawn white oak, stained with a dark tung oil.  Here is the finished cabinet (still waiting to harden enough to wax). 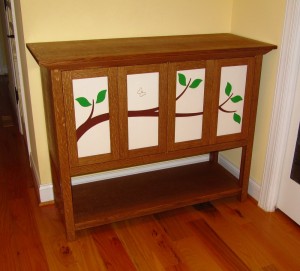 Finished cabinet, ready to be loaded with cookbooks!