While working on the Bathroom Vanity for the Little House in the Village (LHV), I managed to tighten a clamp just a little too much and put a nasty dent in the front leg.  Bummer!

The “Good News Is”[1] that I learned how to take care of this kind of problem a few years ago at a woodworking school in Hertford, NC.[2]

The trick is to ‘refill’ the compressed wood cells (AKA ‘Dent’) with steam and they’ll inflate back to original size (more or less) and goodbye dent.  The photos below show the Before and After using the technique. 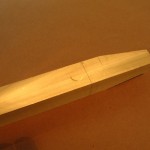 Vanity Leg showing the dent from the clamp. The leg was illuminated from an oblique angle to highlight the depth of the dent.

Vanity Leg After Dent removal. There are still a minor depression, but I couldn’t capture it in a photo. Easily sanded out…

As you can see in the first photo, the dent is very pronounced and easily seen if not corrected.  My choices were:

Only problem was, to steam out the dent, I needed a clothes Iron.   Once again, our neighbors, Phil and Mary, came to my rescue and loaned me one.  Phil, being a curious guy and always ready to learn a new trick, decided to observe the process.

To steam out a dent:

[1] “The Good News Is” is a pet phrase of my wife’s. Using it, she does a good job keeping the rest of us focused on the positive!
[2] Ben Hobbs makes furniture in Hertford, NC and also offers a series of woodworking classes. His classes are ‘productive’ because each class is oriented toward building a piece of furniture that you get to keep. In my case, I took class in which we each built a Pencil Post Bed (link to be added later).